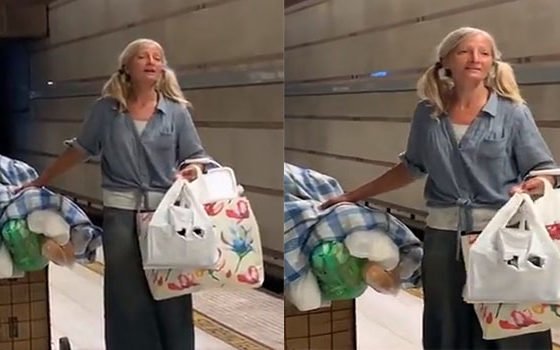 A homeless woman in Los Angeles has a beautiful voice and she became famous after an LAPD officer shared a video of her singing opera in the subway station shared on Twitter where it quickly became a viral sensation.

Emily Zamourka, 52, can be heard singing out a beautiful rendition of Puccini Aria. According to ABC 7, she’s had no vocal training, but is a classically trained pianist and violinist.

4 million people call LA home. 4 million stories. 4 million voices…sometimes you just have to stop and listen to one, to hear something beautiful. pic.twitter.com/VzlmA0c6jX

“You know why I do it in the subway is because it sounds so great,” she told reporters.

Zamourka told the Times that she arrived in America when she was just 24. She settled down in Missouri and worked at a nursing home and restaurant, though she learned how to play violin and piano as a child.

Emily used to play her violin around the city to make money until someone stole the $10,000 instrument three years ago, However, a GoFundMe campaign has raised nearly $50k for Zamourka to assist with her financial difficulties and compensated her violin who steal.

“That’s when I became homeless,” Zamourka told KABC. “When I could not actually pay any of my bills and could not pay anymore of my rent.”

She was surprised to find out the video of her had become so popular and told reporters she just wants to return to playing her music so she can get back on her feet.