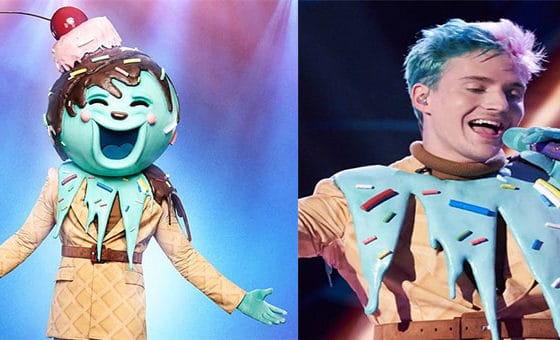 Did you hear of The Masked Singer who everyone’s talking about it? It’s a Fox competition show, the American version of a hit Korean, where celebrities in outlandish costumes sing in front of a panel of judges who have to guess who they are (the competitors are all minor celebrities of some sort) while one by one they are eliminated and unmasked.

The two eliminated celebrities this week were uncovered to be figure skater ‘Johnny Weir’ and the other one who dressed costume pistachio cone with sprinkles was Tyler Blevins, aka ‘Ninja’. The ninja is a Twitch superstar and also good at Fortnite.

Performing as Ice Cream, Ninja sang a cover of Devo’s classic “Whip It,” as well as Lil Nas X’s viral hit of the summer “Old Town Road,” as seen in the clip bottom. As we see the best part is when Ken Jeong says “Not a trained singer!” because, we know, Ninja’s skillfulness lies in totally KO’ing his Fortnite opponents, not crooning about horses in the back.

Shouts Nick Cannon “Gamer, Twitch superstar, and YouTuber!,” In an interview with Entertainment Weekly (EW), Ninja said that he does, indeed, have little professional singing experience.

Also, he said, “I’ve been doing a lot of karaoke at my house the last two years, but other than that, my singing expertise and history is in the show and in my car on long drives.”

Related Topics:EWNinjaThe Marked Singer
Up Next