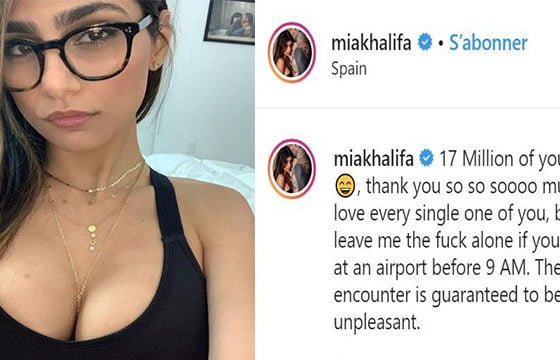 Khalifa, she celebrated when passed 17 million followers and sharing a photograph of herself in Spain, Mia requested fans with a bad word to leave her “the f**ck alone,” which as you may be wondering, is quite the unusual reaction to growing internet popularity.

Mia Khalifa thanks her fans on Instagram she wrote “17 Million of you crazies, thank you so so soooo much!!! I love every single one of you,” but in a recent interview on BBC HARDtalk, she talks about how her past still impacts her life and privacy. She said, “I think post-traumatic stress kicks in mostly when I go in public.”

But despite being her job on pornography bring viewers, she recently confirms that she made just $12,000 from this job, as well as receiving death threats from ISIS, after a video of her performing sexual acts in a hijab scene went viral.

She was banned from some Muslim countries were mightily offended by it like Egyp, Afghanistan… – She is Catholic.