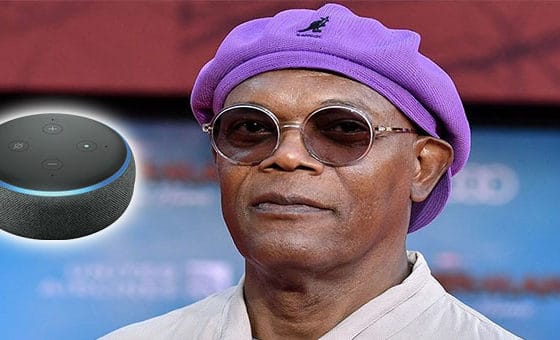 Samuel L. Jackson and other celebrities inked a deal with Amazon to provide the first celebrity voice option for Alexa devices, its cloud-based digital assistant at a big event in Seattle on Wednesday. According to Amazon, it will add more celebrity guest voices for the project starting next year. The Jackson “voice pack” for Alexa will be available later this year for the special intro price of 99 cents.

Amazon’s Echo Buds are the first native hands-free Alexa headphones—an important uniqueness because there are actually headphones on the market with Alexa inside. These Echo buds have Bose noise-canceling tech in them, which you can turn on and off by tap on one of the earpieces, And they have a good battery life of about five hours per charge. The Buds will be available in October for $130.

Also a version of the puck-shaped Echo Dot With Clock cost about $59 that includes a display for showing the time, temperature or other info, and the Echo Studio about $199, which supply 3D audio via Dolby Atmos, a higher-end speaker aimed at contend with excellent products in the category like Apple’s HomePod, Google’s Home Max and Sonos One. And there are more devices will be available like Echo Loop, Echo Show 8, Echo Glow…

There are now 100 million devices equipped with Echo speakers, which Amazon first rolled out five years ago.

PrevNext
Related Topics:
Up Next