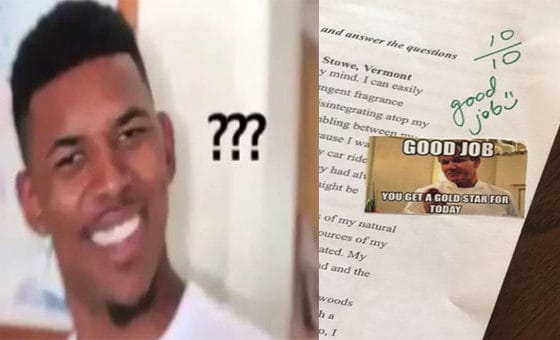 Teens these days are so hard to communicate with because they are speaking another language. Instead of language, they also use memes to convey complex ideas and emotions, but one high school English and media studies teacher decided to try getting on her students’ level by using memes to grade exams.

On Wednesday, Ainee Fatima, a 27-year-old English and media studies teacher from Illinois, shared a video of herself using her meme stickers to grade exams who went viral on Twitter in just one day — and people loved it.

I love grading with my new stickers! pic.twitter.com/4K66qQblSJ

Ainee explained that she makes the stickers herself and shared the template. and she told in her statement she made the stickers on the spur of the moment, though she’d been thinking it for a while, as her 12th-grade students love memes.

Also said, “I was grading exams and started to get really frustrating at the answers my students were writing down, I thought ‘I wish they could see my face right now,'” she also adds, “So I had sticker paper handy, made a fast template on the computer with Confused Nick Young’s face, which is a popular gif used in weird response that makes no sense or are contradictory and some positive Gordon Ramsay memes and printed them out!”

Don’t worry, I did positive memes too! 😂 pic.twitter.com/rTfHCGKQwJ

Fatima said that she wanted the memes to support learning and help erase the stigma that comes with getting a bad grade on a test. She says that these stickers wouldn’t use them for younger students though, use only for amongst her high school seniors.

She said doesn’t know of other teachers at her school who blends pop culture or media into the classroom like this. But since she teaches Media Studies English she says this experience has been an interesting case study about “The power of viral media.”

@daddydaniel28 literally made these a couple weeks ago and now 3 people have shown me this today 🤣🤣🤣 pic.twitter.com/FCCIY1lWg6

Love it!!! I’m a 12th grade counselor and this is the sign on my door lol. The kids love it and it’s a great way to connect with them. Also it’s probably more for my own entertainment than theirs hahaha. pic.twitter.com/9qiOfRCQTB

“I didn’t create enough so not every wrong answer got a sticker so the students who did not get a sticker for a wrong answer were actually asking if they could get one. It made them look at their exam and actually ask me to correct their answers again for some credit,” she said.

this upcoming generation don’t know how lucky they are to have lit ass millennials as teachers lol https://t.co/qKdWQ7tqlP

She’s bringing kids and their parents together at home, too. Teacher of the year!

If I ever get a class with older students I’m doing this. Great strategy to connect with students and do your job!

12 People Who Went To Extraordinary Lengths For A Good Pic

How to Love a Woman – 8 Ways for Men to Love