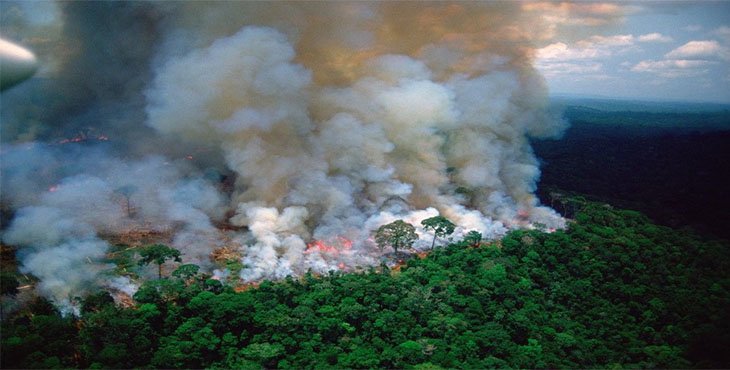 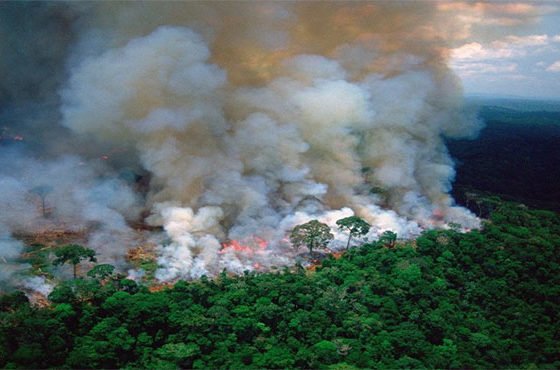 People on the world are using the hashtag #PrayforAmazonia on social media as fires continue to damage Brazil’s rainforest.

EuroNews confirms, these fires, who have been burning the states of Rondônia, Amazonas, Pará, and Mato Grosso for weeks, became so dangerous that the state of Amazonas was obliged to declare a state of emergency. The Smoke created by the fires was a lot so dense that it blocked out the sun around the country, including São Paulo. The map of Windy.com, you can see the full map here. The map has many features like see radar and satellite images and you can zoom in and out, see the temperatures, and many of this. you can see their massive scale.

Brazil’s president is doing nothing to stop what is happening with the Amazon Rainforest. My heritage is from Brazil and it is so sad to see what is happening, it looks like a movie, but it is now. Y’all pray for Brazil! #PrayforAmazonia Brazil is destroying Brasil 😪 pic.twitter.com/vwpB6jfgLu

People expressed concern over the effects from fires will have on the inhabitant, animal life, and the natural landscape. These fires have induced widespread criticism of Brazil’s president, Jair Bolsonaro, who has dismissed the severity of that.

🌎Just a little alert to the world: the sky randomly turned dark today in São Paulo, and meteorologists believe it’s smoke from the fires burning *thousands* of kilometers away, in Rondônia or Paraguay. Imagine how much has to be burning to create that much smoke(!). SOS🌎 pic.twitter.com/P1DrCzQO6x

According to The Guardian, The Brazilian president Jair Bolsonaro said NGOs may burning down the Amazon forest to embarrass his government after he cut their funding. Bolsonaro has no proof but he said ‘everything indicates’ that NGOs are going to the Amazon to set fire

Jair Bolsonaro, has indicted environmental groups of blazing fires in the Amazon and he tries to escape from rising international criticism of his failure to protect the world’s biggest rainforest.

Data confirm that deforestation in the Amazon has risen since Bolsonaro given office. According to a statement from Brazil’s National Institute for Space Research (INPE), there are about 870 square miles of the Amazon rainforest was damaged by fires man-made last month, marking a 278% growing from July 2018. Bolsonaro called the data “a lie” and then dismiss INPE’s director Ricardo Galvão.

“I am confident about this data is a lie. We are going to call the president of INPE here to talk about this situation and that’s the end of that case,” and he said last month, “For the first time in the history of Brazil a president of the republic is searching into fulfilling with everything he does what he promised through the expedition,” Bolsonaro said. “God willing, everything will work and will be okay, policies like mine will continue in Brazil forever.”

Experts say that event could significantly harm the planet earth, as the Amazon rainforest plays an important role in stabilizing the world’s carbon emissions.

Here are some more tweets about #PrayforAmazonia

THE AMAZON RAINFOREST IS BURNING

We could lose one of the largest ecosystems on Earth. #PrayforAmazonia pic.twitter.com/4KJFD1Oa2W

The Amazon forest has literally been burning for 3 weeks now and nothing is being done. The Amazon has such a huge impact on local and global climate factors and no one is taking it seriously. This need to get the attention it deserves!! 🙏🏼#PrayforAmazonia pic.twitter.com/Z0M4wDplso

We are worried about climate change and how the world is going
to end soon but than there is Amazonian rainforest which is literally on fire for weeks.

I hope the government would wake up from their sleep and do something 😑#PrayforAmazonia pic.twitter.com/t8Ha88bzxe

#BTSARMY The amazon caught 🔥 16 days ago and it still hasn’t stopped. This is bad, Earth’s lungs are in flames.

If you don’t care because it doesn’t affect you now, it sure will in the future. Please care and raise awareness with us → #PrayforAmazonia
pic.twitter.com/4ywyQbfdEU

imagine going to the amazon to research its SUSTAINABILITY just to see it BURNING DOWN a year later.

this is the worst. nothing breaks my heart more. #PrayforAmazonia pic.twitter.com/3cf36x1zaA