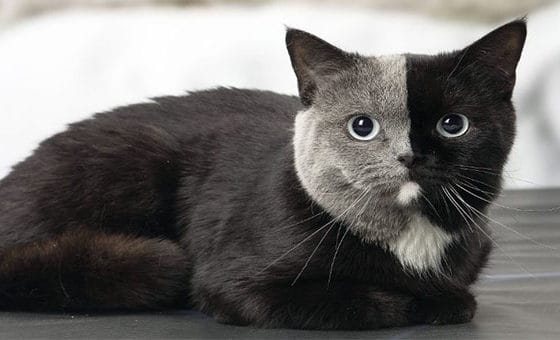 Two-faced cats are a rare scene, and their amazing features continue to attract the attention of thousands of people. Like Venus is one of the most famous cats to have a perfectly two-tone face ‘brown and black’, but that cat named Narnia is quickly gain the hearts of users on social media. Based in France, the British Shorthair is nearly 2 years old and has already grown into a handsome cat with blue eyes and a half black, half gray face, who was captured by professional animal photographer ‘Jean-Michel’

During his born on the 28th of March, 2017, it was clear that Narnia you will be an unusual cat. Stéphanie Jimenez, his breeder, has photographed him from the time he was small enough to fit in her hand and she instantly fell in love with her blue-eyed sweetie. Now that he’s grown, this distinction has become even clearer. His fur has grown fluffier and smoothed out into a straight line that equally divides his features.

This happens when a cat has cells contain two types of DNA, caused when two embryos fuse together. But because it results in one creature, the individual is technically its own fraternal twin.

And now just as adorable as an adult cat.

He was as cute as a kitten.