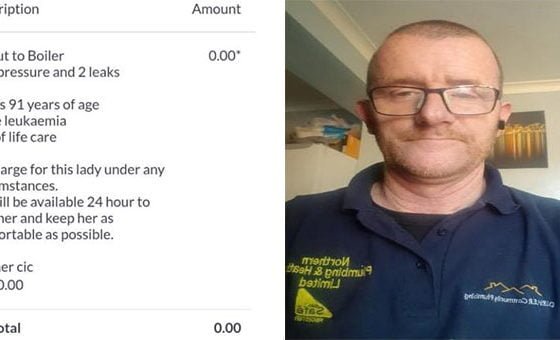 A PLUMBER in England is being praised for his refusing to take payment for his work after an invoice was posted on Twitter showing he fixed the boiler of a 91-year-old woman for free.

James Anderson, 52, from Burnley, goes viral after his invoice with 0 pounds for the elderly woman, who has acute leukemia, was shared online.

“No charge for this lady under any circumstances,” the invoice reads.

Also wrote, “We will be available 24 hours to help her and keep her as comfortable as possible.”

This is the invoice from plumber, James Anderson in Burnley after fixing a lady’s boiler – gives me a little hope for humanity after all pic.twitter.com/zddMJO2f4a

The tweet featuring the invoice has received positive public reactions and has been retweeted hundreds of thousands of times, that helps shine a light for this plumber. People also saying that act of kindness gives them hope for humanity.

Anderson, originally from Liverpool a father of five and grandfather of three was pleasantly surprised about that, revealed he has received more than $33,000 in donations in a single day thanks to international media attention. He has helped thousands of elderly and disabled people since launching his not-for-profit plumbing company DEPHER (Disabled & Elderly Plumbing and Heating Emergency Repair) back in March 2017.

Since the start of Depher CIC, has completed helped 2389 job for elderly and handicapped people from the problem of no heating or hot water, gas leaks, water leaks… majority for free or for a big discount of 25% to 50% …

PrevNext
Related Topics:DepherPlumber
Up Next