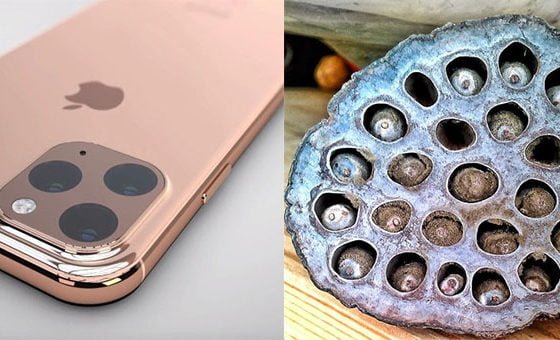 The New iPhone Is Making People With Trypophobia Extremely Uncomfortable

A lot has already been said about Apple’s latest flagship gadget who has triple camera system on iPhone 11. Unveiled on Tuesday nights, Apple launched three of its iPhones at the much-awaited Apple Event, No doubt, the most important highlights of the new iPhone 11 was the camera, However the iPhone 11 packs a dual rearward camera setup, iPhone 11 Pro and iPhone 11 Pro Max both feature 3 rearward cameras. But it seems to be triggering trypophobia attacks in people who see pictures of those phones. Because of the three cameras who been placed closer to each other.

For the people they don’t know this, trypophobia is the fear of many holes who have been placed near to each other, like honeycombs or seed pods. According to Phobias: The Psychology of Irrational Fear by Irena Milosevic, trypophobia is an “intense fear of a repetitive pattern of holes”.

It can even that lead to panic attacks or trigger anxiety, Research confirms.

Several users on Twitter have taken to share their stories after encountering pictures of the iPhone 11 Pro, which was revealed Tuesday at an event in California.

I’ve had really bad trypophobia for years now and seeing pics of the new iPhone 11 all over my timeline makes me want to set everything on fire..stop pic.twitter.com/E1ucM9eeQy

New iPhone 11 giving me trypophobia feeling. Don’t be flexing that ugly ass phone around me if you buy it. 🤢🤮 pic.twitter.com/UGY3GZreiL

keep your nasty iphone cameras away from me @Apple #trypophobia pic.twitter.com/XFZmu2sv3p

So those tweets above make you increasingly uncomfortable? Or do you quickly passed the above tweets? So we think you have trypophobia. And the new iPhone’s probably not for you.

At any moment, someone or friend who buy this iPhone, could point those scary holes at you to make you scare or anxiety. Also, their Arachnophobia (fear of spiders), because the placed of three cameras at the back also look like spidey-eyes.