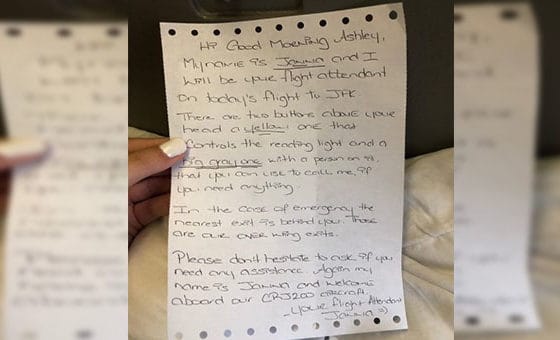 In a heartwarming act of kindness is touching the hearts of people, is about a note handed to a 16-year-old teenager’s passenger on board a plane has gone viral on social media.

When deaf Maryland teen Ashley Ober fly for the first time by herself this summer, although very independent, she was nervous about navigating a big, international airport alone and she was a connection at New York’s JFK airport on her flight from Baltimore, Maryland to Rochester, New York.

But A flight attendant “Endeavor” made her first flight alone an easy experience thanks to a handwritten note that she gave to Ashley has now been shared across social media.

The note was explaining everything she would need to know for the flight and set out information about safety.

Sometimes, all it takes is a little sign to make someone’s day better.

Ashley’s mom Loretta Ober shared a photo of the note on her Twitter account, “My daughter who is Deaf took a flight by herself ! The attendant handed her this note on the plane! Delta makes it amazing!.”

My daughter who is Deaf took a flight by herself ! The attendant handed her this note on the plane ! Delta makes it amazing! @Delta pic.twitter.com/KQGVBq9uVC

The note reads, “Hi, good morning Ashley, my name is Janna and I will be your flight attendant on today’s flight to JFK.” She said also, “There are two buttons above your head a yellow one that controls the reading light and a big gray one with a person on it that you can use to call me if you need anything.”

PrevNext
Related Topics:deafDeltaFlight
Up Next